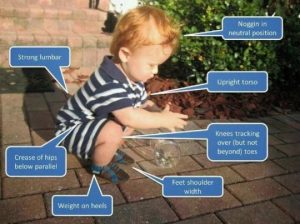 Many people seem to always be bringing up the concept that every human should be able to full squat at an adult age.  I think this is not only not the greatest idea but actually in most cases very dangerous to most adults.  In almost every case I have seen of an adult speaking to squats they mention that humans can all do it at a young age, toddler and baby time in general.  The issue I have and I have seen it first time.  Babies and toddlers joints are no where near set, their body parts are all growing and have tremendous hormone creating to keep them growing and striving.  As they grow in size and shape their joints need space for the new bone growth to take up and only upon the end of puberty and growth do ligaments and tendons hit a somewhat terminal length, size and shape.

Most of the “experts speak to training adults to FULL SQUAT properly but when I see the images, pictures and videos of their clients and themselves full squatting they normally sacrifice the qualities of good joint integrity in order to get a depth of movement that in many cases will cause long term damage to joints, and in case you don’t get it joints just don’t put themselves back together so well like muscles do.  People are sacrificing quality movement for quantity of movement.  In general they point to a person who is older who is in a full squat and they say “look if he can do it you are inadequate because you cannot.  Here is a statement I make all the time.  “Just because you can perform a movement…It doesn’t mean you should perform that movement.”     Just because a guy in India can squat down put his butt on his ankles and eat lunch, it does not necessarily make that movement good for him and it definitely does not mean that he has no back pain or other problems with his body.

The full squat theories I see people pitching is basically based on lack of understanding of the human body and the human condition.  If you get hurt, you heal but what I have found is that when someone is injured (broken) you have to form compensation patterns around the injured part because it no longer works like it used to.  After 20 years of sitting in a chair in school most people I know can no longer full squat.  Their bodies have adapted to the chair position and it would take years of training to get them to Full Squat but even if they did learn to full squat the injury risk to knees, back, hips, SI joint and etcetera may be too much risk for the reward of sitting on their heels. Quality movement should not be for a specific movement only.  Quality movement should be movement that decreases wear and tear, increases functional (useful and beneficial movement) movement and allows a person to live an enjoyable life.

Since I created my concepts on Functional Fitness over 20 years ago I have watched as fitness professionals, celebrities and the media have bastardized it into meaning any stupid idea that comes down the pike.  Functional Movement should be based on a specific persons ability to gain Alignment, Functional Muscular Strength, Structural Stability, NORMAL Range of Motion and a quality GAIT.  Without these elements, no exercise routine will be able to stand the test of time.  Most of these so called experts on Functional Exercise will be broken and have quality movement into their senior years.